Why Am I Obsessed With Dr. Birx’s Scarves? 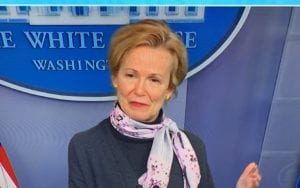 There is no doubt that America has fallen in love with Governor Andrew Cuomo. I get it. I love him too. His late morning daily briefings are a highlight of my day. I have shed a tear or two during them when he tells me that he loves me, that he will take care of me and my family and that we can – that we will — get through this together. I believe him. I have also become a follower of the on screen television (and I believe off screen/real life) bromance between the governor and his little brother, Chris Cuomo, who is currently hosting Cuomo Prime Time on CNN from his basement now quarantined, having tested positive for the Corona Virus a couple of weeks ago.

I patiently wait each early evening to see if Dr. Anthony Fauci will appear at the White House Corona Task Force briefings. I’ve come to rely on him. I trust him implicitly, and like many other viewers of these briefings, I probably read too much into Dr. Fauci’s absence or presence each night, as well as the look on his face and his overall demeanor as I try and discern how we can best flatten the curve and find some kind of hope in the staggering statistics and heartbreaking news of this global pandemic.

There is one other figure who has emerged more recently as someone I look forward to seeing on television, someone I can count on, and someone who I believe is really counting on me — on all of us to do the right thing — to stay home and lookout for those most vulnerable in our communities. Her name is Dr. Deborah Birx, and when I see her, I do have hope. Dr. Birx is a world renowned global health official and is currently the Corona Virus Response Coordinator charged with aiding the White House in the government’s response to COVID-19. There is no doubt in my mind that she is brilliant, and that she has both the experience and the bedside manner on a global scale to tell it like it is to all of us.

But Dr. Birx has one additional asset that makes her an even more compelling figure to me. I can’t look at her without noticing her scarves – those colorful, detailed, drapey, perfectly tied and worn beautiful scarves.

I know that many powerful and extremely bright, forward thinking women have gotten too much attention for their wardrobe choices or their hairdos. There was Hillary Clinton and her pants suits and Michelle Obama with her bangs, sleeveless dresses and cardigan sweaters. I don’t bring up Dr. Birx’s scarves to diminish her scientific knowledge or her political power at this moment. I just relish these scarves. I give her credit for wearing them. I say more power to her. I believe that a woman at every stage in her life, and in any position she may hold, should dress as she wants to dress and not (as so many women have been told rather overtly or inadvertently) as the way a man would dress if he were a woman in such a position.

Full disclosure: I have a thing with scarves. In my most recent book, I dedicate two chapters to scarves. One is a whimsical, multi-colored tapestry like scarf from Anthropologie which I credit with having launched my writing career. The other is a light pink Burberry fringed scarf, which my mother gave me a few months before she died at the age of 57, and which I now believe was her way of telling me to live a happy life and not dwell on losing her too soon. That scarf is actually called the Happy Scarf and was given that name by the iconic British clothing manufacturer.

It’s also not only the fashion choices of powerful women that I have noticed lately. I have become all too cognizant of Governor Cuomo’s choice of how to best don the official seal of the New York Governorship. I prefer the seal on the Members Only type jacket he sometimes wears over the short sleeved collared shirt or the long sleeved button down. It seems more rugged and “Let’s Get This Job Done” — at least to me.

I started to take note of Dr. Birx’s scarves a few weeks ago. Their colors and patterns stood out amongst the dark suited men all standing at what I think is a socially appropriate distance, but am not quite 100% sure. I wondered if I happened to catch her on the briefings where she just happened to wear a scarf. Does she wear one every day? How many does she have? Are other people seeing this?

My father, who is not known for his fashion acumen, but rather his level headedness and optimistic spirit, called me one night to tell me that he thinks that “we all need to listen to Dr. Fauci and to the other doctor with the pretty scarves.” Normally I would have taken this comment as somewhat male chauvinistic, and I did sharply respond to him by firmly stating her proper name – Dr. Deborah Birx. And then I realized that if he is noticing the scarves, others must be too, and there may be something to them? It seems that Dr. Birx’s scarves have their own Instagram account.

What is it about these scarves? Do they remind us of someone in our lives who is loving and caring and always puts herself together no matter what the situation? In my case, that would be my late mother and grandmother. Is it just that splash of color we need to brighten up our days right now? Is it that even though the world seems to be falling apart, Dr. Birx is taking the time to pick out a beautiful item from her closet and perfectly drape it around her shoulders?

Two Fridays ago, as I used one of my last Clorox wipes to disinfect the can of pinto beans I was opening as I tried to make another version of chili that doesn’t taste like chili, I glanced up at my small kitchen television screen and saw Dr. Birx in a beautiful long and super drapey deep colored orange scarf. It may have even been a stole. I had to smile with a special blend of deep admiration and thanks.

I haven’t been able to get it together to wear something other than my daily quarantine uniform of leggings, sweatpants, flannel shirts and hoodies. Hell, I haven’t even managed to wear a bra most days.

And here is this global health official – a leader in the fight against infectious disease for 30 plus years standing before me — before all of us, having taken the time to show us her medical prowess, her helpful relatable tips, her “I know this is hard but we can do this” attitude and yes, her scarves. They tell me that she is still being true to herself, to her own unique style and for whatever reason that I’m not sure I’ll ever fully understand, that makes me feel just a tiny bit better.